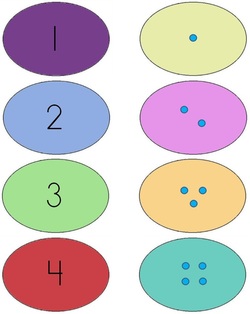 ﻿Relationship between Subitizing and Counting: Subitizing as a basic, innate skill with an advanced role﻿

According to Klein and Starkey (1998) young children, including infants, instinctively have the ability to recognise and distinguish small numbers of objects. This ability to instantly see ‘how many’ is called subitizing and it derives from a Latin word meaning suddenly. Subitizing is an accurate quantitative evaluation of small sets without explicit (internal or external) counting (Piazza, Mechelli, Butterworth & Price, 2002). When we visually number objects, two distinct patterns of performance emerge; subitizing and counting (Groffman, 2009). Subitizing is used for approximately four items or less. The performance of subitizing is fast and accurate, with relatively little increase in response times as the number of items increases. In contrast, counting is used for more than four items and performance is slower and less accurate, with response times increasing as the number of items increase (Trick, 2003).

Early researchers believed that counting did not imply a true understanding of number but that subitizing did (Douglas, 1925). Many saw the role of subitizing as a developmental prerequisite to counting. Supporting this position, Fitzhugh (1978) found that some children could subitize sets of one or two but were not able to count them. None of these young children, however, was able to count any sets that they could not subitize. She concluded with the notion that subitizing is a necessary precursor to counting. Furthermore, Fischer (1984) found that in 4 and 5 year old children, subitizing implies counting. That is, a child who can subitize a number can count that particular number as well. Moreover, numerous children at this age seem to be aware of these two modes of quantitative evaluation. In several interviews conducted for the study, Fischer observed that the children said that they counted whenever they could not subitize. Lastly, Wagner and Walters (1982) carried out a longitudinal study which showed that an early recognition of number was developed before several counting competencies.

Despite the evidence that the ability of subitizing emerges before counting, there were counterarguments against this idea.  Beckmann (1924, as cited in Salter, 1976) was the first to suggest that younger children used counting rather than subitizing. He mentioned the important fact that the younger the child, the greater the tendency to count aloud when answering questions about the number of items in an array. Additionally, Gelman and Tucker (1975) demonstrated that number representations are first obtained by counting rather than subitizing. Other researchers also concur that children develop subitizing later, as a shortcut to counting (Beckwith and Restle 1966; Silverman and Rose 1980).  These findings correspond with Beckmann’s hypothesis that a number must first be counted, even if it is as small as two or three (Salter, 1976). Practice on counting allows children to eventually skip the counting process and ‘chunk’ the array. Slightly larger arrays should also be counted first so that they can eventually be chunked. It is important to note that this view of the process of abstracting number does not treat subitizing as merely a low-level, innate mechanism. Rather it interprets the role of subitizing as being advanced and organised, and as an aid to counting (Gelman and Gallistel, 1978). As Beckwith and Restle assert it, ‘perception of small numbers may be a skill developed by adults, a sort of shortcut to counting rather than an elementary mental event’ (1966, p.439).

More recent research maintains that subitizing small numbers appears to precede and support the development of counting ability (Le Corre, Van de Walle, Brannon & Carey, 2006). Regardless of the debate on whether subitizing occurs before or after counting, subitizing ability should not be viewed as merely a lower-order, primitive process.  In contrast to what would be expected from a view of innate ability, subitizing develops considerably and combines with other mental processes to form a foundation for all learning of number (Clements & Callahan, 1999).  While subitizing may be a basic component skill, it underlies the development of numeration and calculation (Butterworth, 1999 as cited in Groffman, 2009).

Subitizing as a Precursor to Mathematic Skills

As stated previously, subitizing forms a foundation for the learning of number including counting and arithmetic skills (Le Corre et al., 2006).
In their research study, Penner-Wilger et al. (2007) conducted a research study on the relationship between subitizing and early math skills including counting, addition, and performance on a standardized test of math achievement. Results of the study revealed that subitizing was correlated with both number systems knowledge and calculation skill. Additionally, results showed that:

• Children who were able to enumerate 1-3 items without counting performed better in mathematics.
• Subitizing predicted calculation skill both directly and indirectly through number system knowledge. It exerted influence on calculation skill beyond that accounted for by number system knowledge.
• Subitizing ability predicted counting speed; counting speed in turn predicted addition speed and addition accuracy. This is consistent with the concept that subitizing and counting are separate but overlapping processes and that counting depends on subitizing.

Conceptual Subitizing and Arithmetic
Conceptual subitizing – recognising a number pattern as a composite of parts and as a whole – can be used to develop ideas about addition and subtraction (Clements & Callahan, 1999). It helps children develop efficient addition and subtraction strategies because they are able to view objects as parts of a whole (Fuson 1992). For example, the ability to subitize 6 and 3 makes it easier to develop count-on methods when adding two groups of numbers together -  six (and count on 3)…seven, eight, nine. By developing their conceptual subitizing, students can eventually learn to count on with larger numbers. They will come to recognise number patterns both as a whole (as a unit itself) and as a composite of parts (individual units), which is the essence of conceptual subitizing (Steffe & Cobb, 1988).

Subitizing in the Classroom
Across many types of activities, from class discussions to textbooks, students should be shown pictures of numbers that encourage conceptual subitizing. According to Dawson (1953) textbooks often present picture sets that discourage subitizing. The pictures combine many inhibiting factors including complex embedding, lack of symmetry, different units with poor form (e.g., birds that were not simple in design as opposed to squares) and irregular arrangements. Such complexity hinders conceptual subitizing, increases errors, and instead encourages simple one-by-one counting.
When encouraging subitizing, the displays of numbers should follow these guidelines (Clements & Callahan, 1999):
1. Groups should not be embedded in pictorial context.
2. Simple forms, such as homogeneous groups of circles or squares rather than pictures of animals or mixtures of shapes, should be used for the units.
3. Regular arrangements should be emphasized, and a majority should include symmetry; linear arrangements for pre-schoolers and rectangular arrangements for older students.
4. Good, clear figure-ground contrast should be used.

There is an abundance of research that show subitizing as a ‘fundamental skill in the development of students' understanding of number" (Baroody 1987, 115). Students can use pattern recognition to discover essential properties of number, such as conservation and compensation. They can develop such capabilities as unitizing, counting on, and composing and decomposing numbers, as well as their understanding of arithmetic and place value. Subitizing introduces basic ideas of cardinality – concept of ‘how many’, ideas of ‘more’ or ‘less’, ideas of parts and wholes and their relationships. Furthermore, children who spontaneously focus on number and subitizing number are more advanced in their number skills (Edens & Potter, 2013). 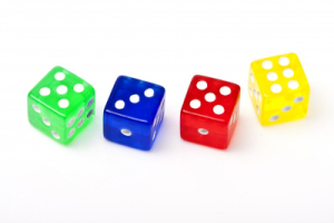